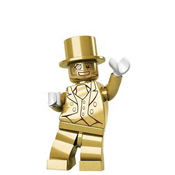 By Lego Maniac 77
28 comments
This Lego build is of The Simpsons - Bart's Treehouse.  It includes Bart, his treehouse, and his friend Milhouse. The inside features a desk, lamp, and poster, along with a piece of pizza. The outside features a ladder built into the tree. To access the inside of the treehouse you have to take off the three attached tree branches along with the roof.
I built this set because I am a big fan of The Simpsons and the only Lego sets I know of that are available for purchase are The Simpsons House and the Kwik-E-Mart.  I think that this set would make an awesome Lego for anyone who is a fan of The Simpsons.  Also, it would be great for anyone who already owns The Lego Simpsons House set.