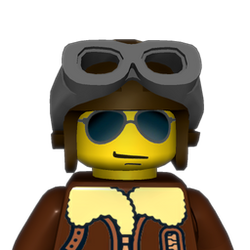 The Octan company is a massive part of  the LEGO universe. We as LEGO users are familiar with the modern version of the super company, but how did this plastic empire come to be? This build of an Octan Gas Station is inspired by the gas stations along the roads of Route 66 and all over the U.S. in the 1950s. It showcases the origins of the Octan company.

It includes two gas pumps in the front of the building, an oil pump in between the gas pumps, two garages on the side of the building, a sign to advertise the station, a Model T Ford, and 4 minifigures. The minifigures include two gas station attendants, and a father and daughter on a road trip. the father minifigure weilds a map and the girl is holding a popsicle. Currently, the station features no printing but will soon. This draft of the Octan gas station includes 1683 pieces.