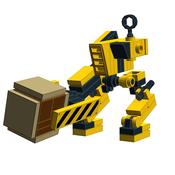 Ghost in the Shell is on of the greatest manga and anime titles of all time. From all the series, movies and video games, the thing that most vividly people usualy remembers, is the climatic battle between the female hero character and the mighty T08A2/R3000 spider tank that is represented in this project, wich was protecting the car where the "bad guy" was hiding. That's why I added a tiny car to the model, as a reference to the original movie scene. The design of this tank is something that has trascended the franchise, because is the most obvious example of a staple format in the "mecha" genre (sci-fi big battle robots), that is the multilegged unit, which fills the evolution gap between the weeled tank and the standing bipedestal robots.

I'm a huge fan of the "mecha" genre, and I like to build them in a very particular size, that is big enough to give them some shape and detail, but also small enough to handle them and play with. I've always had the design of this one in particular as a personal goal, and a reason to keep improving my skills, because it's so imaginative and distinctive. I think this would make a very interesting Lego set because its an inexpensive and easy way to have this icon of manga and sci-fi imagery, in a manageable Lego model, that's an easy gift for teenagers and fans.