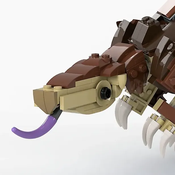 By BertieBrick
58 comments
Freshwater habitats are wondrous places, rich in nature and wildlife. It is easy to relax at these peaceful places, from small garden ponds to sprawling lakes and rivers. Due to the sad decline of these sites, the wildlife found in these habitats is often rare and unique.
I chose 3 distinct freshwater species native to the UK and Europe to feature in this set. Each has a decorated square base with a plaque showing their scientific names, making it perfect for display. The animal models can all be removed from the base. Both LEGO and nature lovers would enjoy this set.
Great Crested Newt (Triturus cristatus)
Great Crested Newts are a species of amphibian and prefer damp environments, including marshes and woodland. During the spring, they will return to ponds to breed, with males using their crests and tails in a courtship display.
Piece count: 225 including base with hornwort.
Southern Hawker (Aeshna cyanea)
A large species of dragonfly, the Southern Hawker, can be found hovering around ponds, lakes and other freshwater habitats. They are agile fliers, able to catch insect prey from midair and even fly backwards.
Piece count: 226 including base with bulrushes.
European Water Vole (Arvicola amphibius)
Small rodents which live in various freshwater habitats, including rivers, streams, ponds and marshes. Water voles make their burrows in the side of riverbanks, where they can be seen nibbling on grass and other plants.
Piece count: 326 including base.
Total piece count: 777 pieces.
If you like my idea and want your own set of pond creatures, please consider supporting my project and share it with your friends!
Please also comment any suggestions for more species you would like to be included.
Thank you!