The main picture for this model has now been rendered. 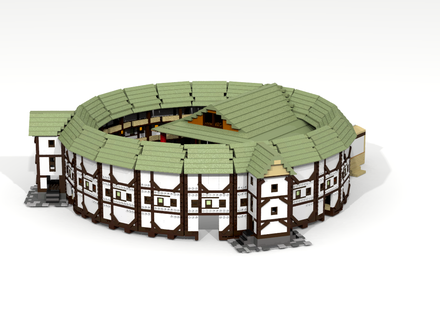 The Globe Theatre model was put together in LDD by using a modular approach as shown in the new image of a section of the building. Overall the globe is built around a twenty sided structure which was laid out by the designers using a pentagram so the angle at each corner is 18Degrees. I initially assembled the complete circle then removed some parts and added the stage and stairs etc.

The model as designed has over 6000 parts but with experience it is possible LEGO could reduce this substantially, particularly if it could produce special parts with the correct angles as this would avoid using lots of smaller parts. The diameter of the model overall is 2x a 48x48 base plate but because it has many angles it will only connect in some areas, e.g., below the stage and back stage areas.

Please also note that the laptop I use at this time is restricted on what software can be uploaded and some of the alternative software for rendering models is not on the approved list, e.g., POVRAY. I will aim for this when I get a new laptop.