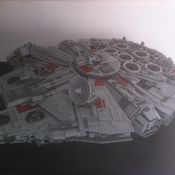 "From here the Earth is beautiful, without frontiers or boundaries.​"

On April 12, 1961 at 9:07 am in Moscow, in the Vostok 1 Yuriy Yagij Gagarin pronounced the famous phrase "Let's Go". The spatial era began and our blue planet began to be small, too small. Since then, other heroic men of different nations have shown that man when faced with impossible missions can reach all goals without limitation.
Soon we will pay homage to Saturn V another great project of man, but with this set we can pay homage to the first man who went into space defying the laws of physics of that time and making possible all future adventures.
The original unit was made up of a modified r-7 missile, at the top of the rocket the missile head was modified to create the space for hooking up the Vostok1 tank where Gagarin took the place, the only passenger.

The set faithfully reproduces the r-7 missile at the time of launch with all three stages and anchor hooked propulsion rockets. At the top you can see Gagarin's minifigures inside the ship ... 3 ... 2 ... 1 ... Departure. The space era begins.