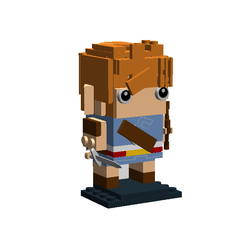 Link, the hero of time is now created in LEGO form! Support this 118 piece build, so you can have the once in a life time opportunity to build the greatest hero of Hyrule!  He originally debuted in the Legend of Zelda in 1986, and now he is known all around as one of the most iconic video game characters ever!

The latest release of the Legend of Zelda is known as the Breath of the Wild, following the adventures of Link and the hardships of princess Zelda on the Wii U and Nintendo Switch! Please support, comment on, and share this LEGO build created by Henny4315 and once this reaches 10,000 supporters it will be considered to become an actual set!