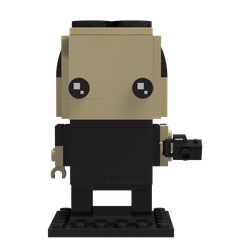 My dad was an avid backgammon player. So I saw him constantly playing with his friends backgammon. From him I learned the rules of the game when I was about 6 years old. At that time I could not play really well.  I was able to win a game until several years later.  But he had infected me. That's how I learned to love the game.  A few months ago I had the idea to teach the game to my youngest son. Since I had not played for a long time and had no board, the purchase of a new backgammon board was due.  That's when I got the idea why I should not build one from Lego. I wanted to have a small handy game that takes up little space and can be taken on trips. At first I experimented with stones from the box.  However, I was not satisfied with the result.  So I took my PC and developed the game digitally. It took me several tries to find the right size. When it was finished, I found it so beautiful that I wanted to show it to other Lego enthusiastic. So I came up with the idea to upload the game here.