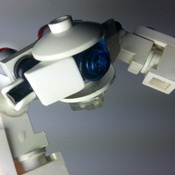 The mark 38:
I create this model to be fully accurate with the one that apears in the featured film, This model is a great representation Igor featured in the film Iron Man 3 and it gives an idea of how iron man could use it.

31/5/2013, Update 1: Thanks to a sugestion, i have created a smaller version of this suit, even more accurate scale based on a relation mini figure to suit, now an iron man mini figure or any mini figure can stand up inside the suit.

04/6/2013, Update 2: closer to perfection, i have created the most accurate version of this suit so far, more round pieces configure the main body and the chest can move up and down to give that "hunchback" look

please comment and support the projects
for more information and new uncoming projects go to:
http://www.facebook.com/LegoMasterDesingers

The articulation:
Is a solid construcction, it has articulations in main points of motion for mayor range of posability, discribed below:

1. The head : Has two points of motion, it can go from left to right and from up to down

3. The legs: have three points of motion from the hips to the knees

4. The arms: from the shoulder to the fingers, both arms have 5 points of motion each one

5. the chest: can move up and down to give that hunchback look to igor

The repulsor technology:
this representation of Igor comes with pieces that represent the repulsor tech, the model has holes in both palms of the hands and the feet to put this translucid parts to make it look like it's flying.

Both the top and the head of this model can be moved to reveal a minifigure inside.
A full ironman figure fits prefectly in the suit, just like in the comics.
Any figure with a smaller helmet than iron man should fit inside.

Look the resemblance between the model and the movie version, there are somethings to work on but its nearly there