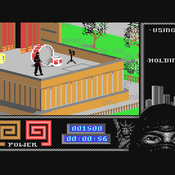 I want to pay tribute to Last Ninja 2 because I still think that it was the best game that came out of c64!!

Let me inform you briefly from wikipedia what Last Ninja is for the folks who don't know about it.

"Last Ninja 2: Back with a Vengeance is an action-adventure video game developed and published by System 3 for the Commodore 64, ZX Spectrum and Amstrad CPC in 1988 as a sequel to the 1987 game.

The object of the game s to guide the ninja protagonist Armakuni on his journey to defeat the evil shogun Kunitoki.

Last Ninja 2 was an enormous commercial success. According to System 3's Mark Cale (producer of the game), 5.5 million copies were sold for the Commodore 64 version alone; at that time, the user base of the C64 was estimated at 20 million, meaning that one in four C64 owners bought the game."

The game was way beyond its time with its beautiful gameplay, stunning detailed graphics and amazing music. It was so great that you often find questioning yourself "Am I really playing this game on c64 or something else? :) "

I still enjoy playing this game even today although it has been 27 years (!) since it came out. It's still a great game. If you haven't had the chance to play this great game, you should immediately play it or at least watch the longplay on youtube.

I'm awating the support of every Last Ninja fans out there!!