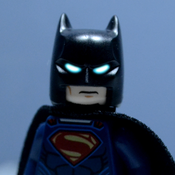 Imagine a boxing ring with none other than the Italian Stallion himself, Rocky Balboa, in Lego. This set consists of a boxing ring, a crowd of people made with small parts, as well as 7 minifigures: Rocky Balboa, Clubber Lang, Adrian Balboa, Apollo Creed, Ivan Drago, Mickey, and a boxing referee. I built this set because I am a fan of the Rocky series and I thought it would be a great way to pay homage to it if it became an offical Lego set. I think Lego fans and Rocky Balboa fans will enjoy this set because it is a blast from the past and it is a great way to reminisce Rocky's legacy as a movie character, and as a franchise, as well as introduce people to this legendary fictional boxer.