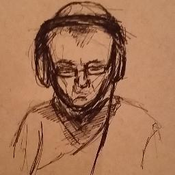 My inspiration for the Arrow comes from the starfighters of the seventies and eighties sci-fi shows and movies. Lego had done all kinds of wonderful ships at the micro scale, and the Arrow was my first attempt at a micro-build of my own. Years later I took the fighter out and decided to see if I could build a convincing minifig scale version of the ship to stand alongside it as an artistic piece.

The Great Democracy Military Arrow’s storyline is that of a lightly armed, very fast, very manoeuvrable ship that defended a democratic confederacy of but two worlds against the capitalist Explorer’s Guild Military, with 103 worlds. This ship symbolizes the power of an underestimated, heroic space fighter to hold its ground against the more rotund space tanks of the Explorer’s Guild Military. The Arrow represents the victory of pilot skills unhampered by ship design and capabilities. If you would like to read more about the Arrow in the context of the first Space War, please follow read my blog called Laptopbrickworks@wordpress.com.

I’m extremely proud of my work and would be delighted if you would vote for my project. Please vote for the Arrow duo to become a Lego Ideas model!