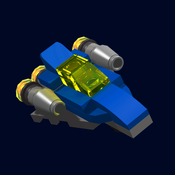 It's time to go big!

These bricks and plates are really huge - but each one is made of many small System elements and the bricks have a hollow interior and a hinged lid. They would be perfect for displaying them on a shelf and keeping small things inside them at the same time. Each big stud has a little stud on top of it, so the macro-bricks and macro-plates are stackable just like ordinary Lego elements. You can easily build something from them, and the 1x1 ones can even rotate on the studs!

However, those big bricks don't come empty! They have little models inside.

Blue 1x2 brick contains a yellow and orange race car that has an adjustable spoiler and a seat for a minifig (helmet provided, drive safely!).

Yellow 2x2 brick contains a minifig-scale garden with an apple tree that folds down for storage, a bench, a lot of flowers and plants, a path and a basket for apples. You can pick a big red apple from the tree and there are also some smaller ones, represented by red round 1x1 plates. The bench is placed at an angle and minifigs can sit on it.

And inside the red 2x4 brick you can find a complete micro-scale moon base in Classic Space colours, together with 5 vehicles: two spaceships, one mobile rocket launcher (complete with a detachable rocket that has a tiny satellite on top), one radar buggy and one tracked vehicle with a movable arm that you can use to pick up a metal meteorite from a nearby crater (included in the base). The base itself comes in two matching parts and consists of several buildings, two landing pads, a road, a radio telescope, a command centre with antennas, a lab with a T-shaped antenna and space for the meteorite, a control tower, some fuel tanks and a moon crater. A lot of these models have parts that move and/or fold down for storage.

In addition, my model includes a little model of itself and two minifigs, a boy and a girl. They give a feeling of scale to the macro-bricks, and the minifigs can drive the car or go to the garden.

All in all, there are almost 1500 bricks in total. I think that this model would be great fun for all Lego enthusiasts, both young and old (although the younger ones might need some help from their parents because of the size of this build). It combines the simplicity and countless possibilities of basic Lego bricks with some intricate and detailed models that are very varied and use some interesting building techniques.