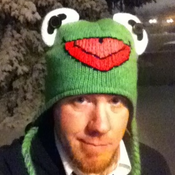 By jedikermit
3 comments
This LEGO CUUSOO Proposal is for Superman's Fortress of Solitude. Batman's got a great headquarters in the Batcave, and although I've seen some proposals for a Hall of Justice (a great idea, Superfriends-style), I haven't seen any for a minifig-scaled Fortress of Solitude. With the movie MAN OF STEEL coming in summer 2013, and the list of Superman LEGO playsets not including a Fortress of Solitude, I figured I'd pitch this one.

My design for the Fortress of Solitude is an attempt to combine various versions of it--the crystalline design seen in the movies and Smallville, combined with some features seen in the comic books and cartoon series. I threw in some characters--heroes and villains--that I thought would make a good storyline for the playset. From the outside, and especially from a distance, the goal is to make it look as much like the movie Fortress of Solitude as possible--a lattice of jagged crystals at odd angles. When you get closer, you see more of the details, and even see inside. The large crystals are all on hinges, and can be positioned away from the Fortress to give access to the interior. 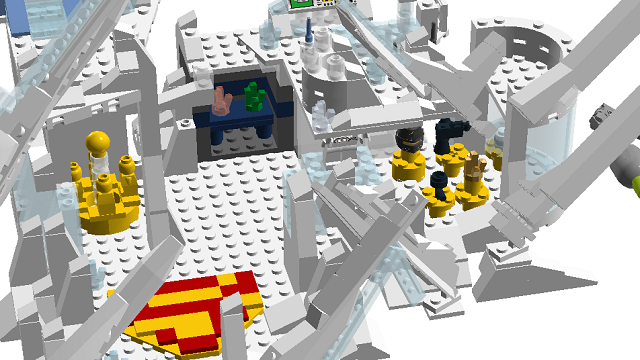 Some of the elements on the first floor of the Fortress of Solitude include an "S" shield built into the floor (a large printed piece if that mosaic doesn't do the trick for you), a sort of shrine or memorial to Krypton and Superman's Kryptonian family (Jor-El and Lara, possibly his aunt and uncle too). There's also a Trophy Room--Batman's trophies are more famous, but Superman has his own--the Phantom Zone Projector, the Bottle City of Kandor, some others. There's also a Kryptonian Spacesuit so that Superman can go on extended missions in deep space. One of my favorite features is the secret Kryptonite Vault--a wall that looks like ice slides aside to reveal a lead-lined vault that has green and red Kryptonite in it. After Superman confiscates it from villains he has to put it somewhere, right? 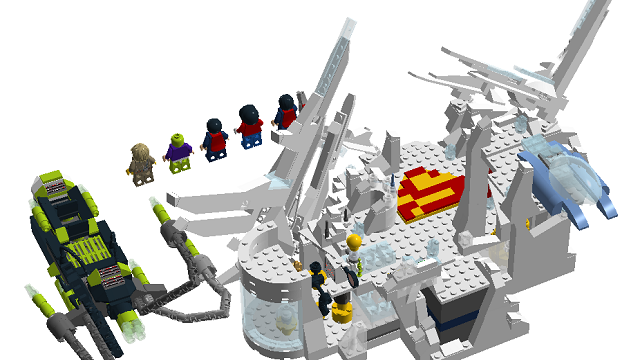 On the upper level, at the rear of the Fortress of Solitude, there are some other features--a futuristic computer console controlled by crystals inserted in chambers (as seen in the movies and the television series Smallville). There's also a sickbay that has a surgery droid, equipped with a Kryptonite scalpel. The other feature on the upper level is Superman's rocket--the one that brought him from exploding Krypton to Earth when he was just a baby. My storyline here is that he salvaged enough of it to make a new vehicle--one that could carry him on those deep space expeditions. 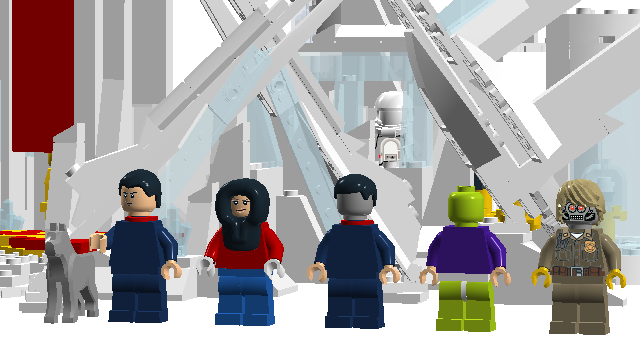 The characters I'd include with the Fortress of Solitude:

Krypto the Superdog. He's the same size and shape as the current dogs included with some Police sets; he'd just need to be in white and have some kind of cape. For my Krypto above, I just put a red tile on his back to represent the cape--there may be a better way to do it.

Superman. Of course we need the Man of Steel for his home. I imagine it would just be a standard Superman minifig, but a variant of some kind would be cool too.

Lois Lane. She's a key part of the Superman legend, and whether she's his girlfriend, wife, or simply his ally, she's the most important woman in his life. She'd be at the Fortress of Solitude with him, and I'd propose a Lois clad in arctic gear to help her feel more at home.

Robot Superman. In the comic books for a long time, Superman had robots that occupied the Fortress of Solitude, keeping things running while he was away, and keeping him company when he was home. They have powers similar to Superman, and look enough like him that most people can't tell the difference. I'd make them a bit more robotic, with differences so kids know that it's the robot.

Brainiac. He's a favorite villain of mine, no matter what his current appearance is. I tried to make the Brainiac minifig look like the Silver Age version, seen in Challenge of the Superfriends--any other version would be cool too.

Metallo. He's not my favorite Superman villain, but I think he's powerful enough to take on Superman, but enough of a gun-for-hire that Brainiac could get him to come along on a trip to the Fortress on a crime spree. This is a version of Metallo we see frequently, with his human face off, and his robotic face coming through. I'd also find a way to represent his Kryptonite heart in his chest. 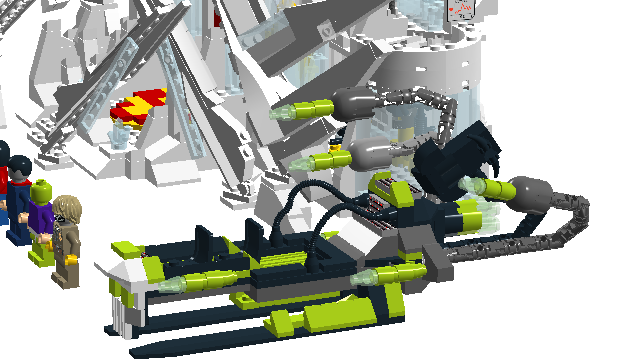 The other element I'd include for the Fortress of Solitude playset is what I call "Brainiac's Skull Sled." Brainiac's most famous for his Skull Ship--a large spaceship that's shaped like a skull, with tentacles curling out of it. This is an arctic journey, so I'm giving Brainiac a skull sled--there's a skull on the front of it, two seats for the occupants, and tentacles sporting Kryptonite blasters and a battering ram in the back.

My storyline is basically that Brainiac and Metallo have discovered the secret location of Superman's Fortress of Solitude, and launch an attack. They break into the Trophy Room (or the Kryptonite Vault, or the Krypton Shrine) and steal something valuable to Superman. Lois Lane snuck aboard the Skull Sled, and gets to Superman just in time to warn him--will he be able to stop the villains before they make their escape? With Brainiac's programming prowess, will he turn the Robot Superman to the dark side? Will Krypto mistake Metallo for a giant fire hydrant? The story possibilities are endless.