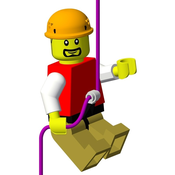 This model was inspired by the countless hours spent by firefighters during the fires that ravaged the Cape Peninsula in Cape Town, South Africa in 2014.

The Unimog chassis is such a versatile and popular chassis for a lot of applications, among other off-road fire trucks. These were up and down every road across the peninsula during that time.

My son also has a lot of Lego sets, among other, two firetrucks. I designed this one to hopefully complement the current range of fire trucks available as there are none to fight those out-of-control Lego bush fires.

This model is in honour of all the Western Cape firefighters.