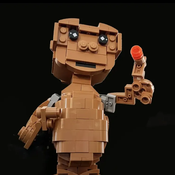 By legocharactermasterpieces
56 comments
E.T. the Extra-Terrestrial
All the way back in 1982 E.T. - The Extra-Terrestrial movie, was released. Regarded as one of the greatest films of all time - a Steven Spielberg's masterpiece!
Construction
I wanted to design and create an E.T. that was bigger and more detailed than a brickheadz but small enough to make him affordable for everyone.
I took plenty of time planning every curve, maximising detail and most importantly including his glowing finger!
His exterior is made up of nearly all medium nought coloured bricks. Internals consist of lots of snot bricks going in multiple directions.
Standing at only 13cm tall and 11cm wide (including arms) he can be displayed anywhere! Free standing, doesn’t require a base. He has adjustable arms and fingers for different poses.
He is made of over 300 Lego bricks.
E.T. is one of the most loved and favourite aliens of all time! He would love your support!
E.T. Phone Home!