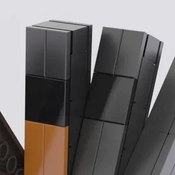 By ScottDemarest
17 comments
Turn your creativity setting to 100 with this proposal for a Lego kit inspired by the Nolan film, Interstellar. TARS is one of the robots featured in the film and his stand-out design translates naturally to Lego. He can best be described as an amalgamation of articulating blocks that can actuate themselves to meet any task. With his design originality, general awesomeness and dry wit, this under appreciated character deserves to stand among the ranks of R2D2 and Data as one of the most memorable robot companions in sci-fi. Eight years after the release of Interstellar, this kit is long overdue.
The completed kit stands at about 5 inches tall and 2 inches wide, the perfect size for a desk or book shelf decoration. His four main limbs (if you can call them that) are fully articulated and have pivot points that can be adjusted just like the movie. The construction is such that the studs are concealed as much as possible and the tiling is such that the surface groove pattern closely emulates the film version (both front and back). A set of (semi) retractable arms adds the option to have TARS hold small objects.
The production version will have the TARS name printed on the front in place of the orange tiles.
In sum, Lego TARS is a fully posable, near movie accurate, and inexpensive option for the sci-fi or Nolan fan.
So hurry up and support. This is no time for caution!