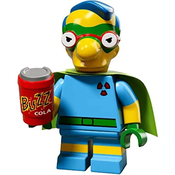 By apovanhouten
18 comments
Michael Jordan's Brickheadz, considered the best basketball player in history, an icon of the 90s.
Build Michael Jordan with the iconic Chicago Bulls uniform. A masterpiece for every basketball lover.
Nicknamed the Air Jordan and His Airness for his athletic and technical qualities, he was elected "the greatest North American athlete of the 20th century" in 1999 by the ESPN sports television channel. The fame gained on the field made him a sports icon, to the point of pushing Nike to dedicate a line of basketball shoes to him called Air Jordan, introduced in 1984.