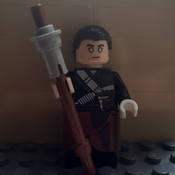 By Chirrutomwe99
7 comments
'I love it when a product idea comes together'
The 80s, the era of weird dancing, wild hair and pop singers. Truly an era that is more significant to those living within it. However there are some elements that are timeless, 80s tv shows like the A-team will still bring joy to those who like action and comedy.
This product idea is based around a vehicle seen very little on the show, but a vehicle that is still a great icon of the show. One of the members of the A team, Faceman was a very extravagant and stylish character. Faceman's prize possession was an 80s sports car that kept being damaged which was a running joke on the show.
The idea consists of the car itself, which has a red and white colour scheme, red seats, and a convertible type design. The idea also includes one minifigure which is Faceman, naturally.
There needs to be more sets based off of action shows from the 80s.
I really would appreciate any support and feedback you could give me and hopefully this can reach 10,000 supporters!