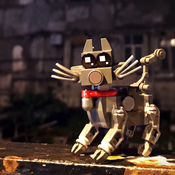 Hi everyone :) This is my 2nd project, it is called "Iron Patriot's Secret Base", we all knew that Iron Man launches from Tony Stark's workshop, but what about Iron Patriot? This project is here to provide the answer.

So, as can be seen in the images here, the facility consists of a few major parts:

3/ Weapon storage for keeping back up weapons and the parts.

4/ Launching pad where Iron Patriot will launch from.

5/ Control panel to control the entire facility. (A weapon is mounted near the control panel, in case if there is an intruder visiting).

6/ Maintenance bay that keeps all the equipments and tools needed to keep Iron Patriot running, a back up suit (War Machine MK II) is also stored there.

Here are some special features of this set:

2/ The table at the weapon storage has a secret compartment, it keeps another laser cannon in there.

4/ There is a operation table in the maintenance bay, it can spin and adjust angle in case if you want to let Iron Patriot or War Machine lies down a bit, the monitor on top of the operation table is also adjustable. A tool rack is there and a tool cabinet is there too, those drawers won't open, but it serves as a table.

5/ An equipment table and a tool box also come with the set.

6/ "Little Helper" has a good arm with good range of motion, it can pick up things on the floor and place it on the table (please see the demonstration in the images).

7/ Please also see the latter part of the images, it shows the Iron Patriot's launching sequence.

If compare with my another project "Tony Stark's Workshop", "Iron Patriot's Secret Base" is smaller in scale and a bit less fancy or low tech, but I think it suit Iron Patriot well since it is military operation in a military facility. However, this set still has plenty of interesting details for kids and adult builders to explore.

I hope this project can earn your support, thank you!!