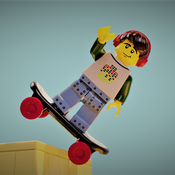 Never trust to general impressions, but concentrate yourself to details.~ Sherlock Holmes
Sherlock Holmes is the most well-known detective of all time. This infamous character with his cap on his head, a pipe in his mouth, and a magnifying glass in his hand captured the attention of millions around the globe.
What is it?
This model includes Sherlock Holmes' home (221b Baker Street), Sherlock Holmes and Dr. Watson with a hansom cab. There are three levels to the building. I tried to capture the classic London street and the iconic 221b Baker Street.
I used a lot of reference photos of 221b baker street in London to recreate the scene.
Why did I build it?
I recently finished reading "The Adventures of Sherlock Holmes" and was looking for a product idea to build. I love detective stories and movies of all sorts. Sherlock Holmes is probably the most iconic detective in history (even if he is a fictional character).
Why would it make a great set?
Sherlock Holmes is a very popular and very old franchise. There have been numerous movies in the old days about A. Conan Doyle's character. More recently, though, there have been two Sherlock Holmes movies featuring Robert Downey Jr. and there is a third movie scheduled for 2021.(Perfect timing if this model get approved)
There is also a BBC TV series made featuring Benedict Cumberbatch and Martin Freeman that ran from 2010-2017. However, a new season is due to come out in the near future. This means, even though Sherlock Holmes is more than 100 years old, it still is relevant.
The Model:
This model was built digitally in Stud.io 2.0 (I built the model in real life, but didn't have enough bricks to finish it). It was then exported to Mecabricks.com where I added custom prints and final adjustments. I then exported to blender. I added lights and set up the scene in there. Using Mecabricks' add-on for blender I did the final renders there. The last picture is some of my early sketches of the project. Many thanks to the DigiLug discord server for helping me out and giving advice.
Cheers ;)