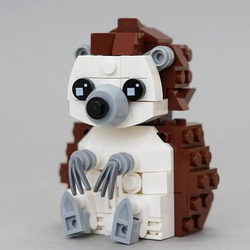 Paddington Bear is a fictional character in children's literature. He first appeared on 13 October 1958 in the children's book A Bear Called Paddington and has been featured in more than twenty books written by British author Michael Bond. Paddington books have been translated into 30 languages across 70 titles and sold more than 30 million copies worldwide, A much love fictional character in British culture, a Paddington Bear soft toy was chosen by British tunnellers as the first item to pass through to their French counterparts when the two sides of the channel tunnel were linked in 1994.

Please help to vote and share this project to your friends and family. This set will be a perfect gift to put on your desk and shelves. Thank you!