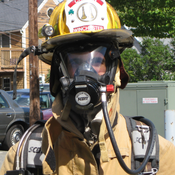 By DisasterBricks
11 comments
This parody of 1960's-era spy TV shows and movies has every spy trope and cliché you could ever want in a LEGO playset!
The Top Secret Spy Base is well-hidden under a block in a seedy part of town...
Top Level
The Opening Graffiti Wall actually hides the Spy Base's garage and a souped-up coupe, with Agent Sideswipe at the wheel!
The Forced Perspective Skyline makes the buildings seem smaller than they are and covers up the lab that's really behind it.
A manhole cover serves as an Escape Hatch from the Spy Base, in case Agent Brickwell's mission report doesn't go well.
The Sliding Cabinet in the broom closet of the old-fashioned Dead Drop Coffee Haus conceals the true entrance to the Spy Base.
Finally, take the Mega Elevator down to the Spy Base itself...
Bottom Level
Getting to the Boss's Office is no easy task!
First, tip toe delicately through the Laser Beam Hallway and avoid burning the lapels off of your recently dry-cleaned suit.
Then, dance your way past the Spinning Saw Blades of Doom without breaking a sweat.
Finally, channel your inner fish and survive a dip in the Shark Tank to find the ladder to the Boss.
Middle Level
The Boss's Office is suspended over the Shark Tank. If you failed your mission again, I hope you're good at grovelling...