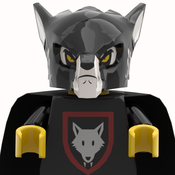 By Brick_Wolf
75 comments
The Wolfpack has returned and they are stronger than ever! The true leader behind Wolfpack is finally being revealed and the world will tremble when they learn the true identity of the Wolf King! Under the strong leadership of Wolf King, Wolfpack is no longer mere bandits and they unleash fear throughout the land. After hiding in their haunted tower nearly 30 years they now have a magnificent castle that will surprise you in every corner. They now have the power to challenge the other kingdoms and they even captured king of royal knights! Now it is your turn to manage this epic castle. What adventures will you experience with it?
Features:
Minifigures:
What did I try to achieve with this set?
My notes on the model:
I had a great time while building this castle,I hope you like it. If you do please support it so maybe we can bring back the long waited castle theme.