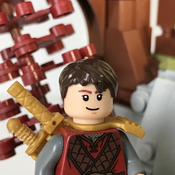 LEGO hasn't had a great jungle theme like Adventurers in a while, so I thought it would be great to get another tropical set out there! This build is supposed to be part of an island that is now in ruins, and this section has now been flooded. I got the idea for a build like this earlier this year, and decided to build it for fun.

The build is quite sturdy, (I was able to flip it upside down without anything other than the fish falling off). There is plenty of cool underwater parts and plants, as well as a nice tropical bit on the top. Since there is an underwater level as well as an above water level, it gives the build plenty of playing oppritunity. Even though it's a tall creation it stays up quite well since the base is pretty large (which also gives more area to play down below). Overall I think it would be a great idea for a Lego set!