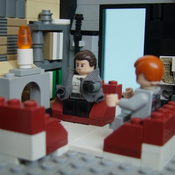 By QuetzJesh
10 comments
This set of Sherlock Holmes is based on the series of the eighties called: The Adventures of Sherlock Holmes.
Apartment number 221B contains two floors, on the first floor there is a coat rack, a table to accommodate guests, a sofa to wait, a flower pot and some stairs, in the room of the
Mrs. Hudson there is a kitchen, a tea table, a bed and a chest to put clothes,
The second floor is the room of Mr. Holmes that contains three sofas, five chairs, a dining room, a laboratory, three shelves full of books, a table for Mr. Holmes to dress up, Doctor Watson's desk and a fireplace with a candle above it, outside the apartment there are two small gardens, five windows, a door with a sign that says 221B, a lantern and boxes containing a secret rope.
There are five characters, among them are:
The dectetive Sherlock Holmes
Doctor John Watson
Irene Adler
The police dectetive Lestrade
Professor Jim Moriarty

There are also scenes from the series such as the arrival of the King of Crime, Professor Moriarty, Sherlock accidentally burning his newspapers and the silhouette of Mr. Holmes in the window. we made this set for the series and two books by Arthur Conan Doyle, The Adventures of Sherlock Holmes and The Hound of the Baskervilles.

An apology to Mrs. Hudson for not putting her on set.