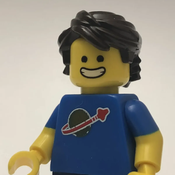 By _TacoBricks_
52 comments
Music To Your Ears
In 1895 the first vinyl record player was invented and mass produced and brought music into the homes of many across the globe. Today, after more than 125 years, vinyl records are still being mass produced and sold in many stores around the world. Though the technology around music has developed and improved in leaps and bounds. Many people, myself included still enjoy the novelty of listening to music on a vinyl disc. To celebrate the legacy of this great invention and the history surrounding it, I built a life size vinyl record player that spins and plays music! (Music works with the assistance of a wireless speaker hidden inside the build)
Functionality
This brick built vinyl record player functions just like a real one. The inside mechanism that spins the record itself is built using gears and a chain link thread to replicate the functionality of a belt drive, just like in an actual vinyl record player. The mechanism is easily powered by a power functions motor and battery box. On top you have a brick built arm and needle that is able to spin around and lift up to drop the needle on the vinyl disc. The front of the record player has a brick built (non-functioning) speaker, adjustable equalizer sliders, and a volume and pitch knobs. The back of the record player has a removable panel to access the battery box and to insert the wireless speaker. The vinyl disc itself is removable for separate display or to flip it over to the "B" side.
Backstory of The Build Itself
I have had the idea for the brick built record player for some time now. I love collecting vinyl record, as I believe music sounds slightly better on records and I also enjoy the novelty of having these huge discs that play music with such a tiny needle. I built the first draft of the model back in late June-Early July 2021 and was very satisfied with the build. The hardest part was getting the spinning mechanism to be strong enough to spin the slightly weighted brick built disc and to spin at a speed a real record player would spin at. I built the brick built vinyl disc on top of one of my actual vinyl disc to get the sizing as accurate as possible to the real thing. I was very happy with how the build came out in the end, enough to where I had started considering putting it here on LEGO Ideas. I decided to wait until I got more feedback from fellow builders at a Lego convention I was about to attend at the end of July 2021. At the convention the vinyl record player was very well received and many people said it belongs on Ideas, so I returned home with some ideas on how to improve the build in terms of strength and overall look of the build. I made the improvements and have now felt it was time to share my idea with the world.
I believe this life size, brick built record player has the potential to be an incredible LEGO Ideas product that would look great along side the LEGO Ideas Typewriter and Fender Guitar. I think that this has been one of my best builds yet and I hope you all enjoy it as much as I do. If you want to see more of the record player or my other builds, consider checking out my YouTube Channel or my Instagram page. Search for the username: TacoBricks. Thank you for taking the time to read this and for considering to vote for my build. Happy building!
Sincerely,
Daniel :)
AKA: TacoBricks