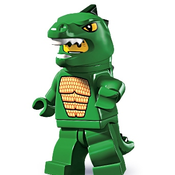 The Bug Swatter is a high mobility artillery vehicle designed to chase Bugoids over any terrain. Unlike the licensed Galaxy Squad kits, the Bug Swatter does not have dual functionality; however, it more than makes up for it with a huge amount of firepower, including six cannons, two lasers, and four flick missiles. Two of the cannons, lasers, and flick missiles are atop a rotating platform that can rise from within and fully rotate. The Bug Swatter is piloted by a member of the White Galaxy Squad team, with a gunner sitting in the back. The gunner bubble is removable to get access to the minifig.