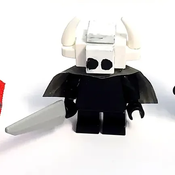 By Dragon Lord
7 comments
This is a LEGO set based on the video game Megaman. In Megaman, you play as the titual character, Megaman, as you chase down the evil Dr. Wily who is trying to take over the world with his reprogrammed robots. This set is based specifically on Megaman 3's final boss, a giant robot called Gamma controlled by Dr. Wily and includes a brick built version of the Yellow Devil from Megaman 1 and Megaman's dog, Rush. The minifigures included in this set are Megaman, Dr. Wily, and Megaman's rival/brother Protoman, who is a boss in multiple Megaman games since Megaman 3 and has also been a playable character in some games as well.
I made this set because I love the Megaman games and I would love to see LEGO sets based on the game. Megaman has a lot of potential for LEGO sets and I felt that this was a great choice for the first Megaman LEGO set. Gamma and the Yellow Devil both have a lot of attacks that can work as play features, and you can even open Gamma's head, so you can place Dr. Wily into the control area just like in the game!
I think this set would be great for collectors, kids, and fans of Megaman as it includes play features, display capabilities, and multiple things from some of the most well known and beloved Megaman games! If this was an official set it would sell extremely well and would be loved by many LEGO and Megaman fans.