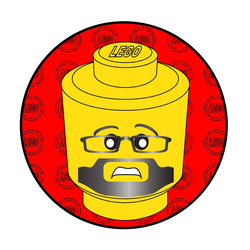 Between 700AD and 1000AD, coastal villagers feared nothing more than seeing the carved prow of a Viking Longship emerge from the ocean fog. This LEGO model recreates the historical nautical ‘Knarr’ design used by the Vikings in their longer, larger, ocean-crossing vessels. The Knarr Longship is equipped with provisions for extended periods sailing at sea; however, when the Viking raiders reach the coast they can then lower the sail, drop the beam, and row up the river to their final destination.

Unfortunately, these village guards and hapless villagers regret their own lack of preparation.
Historically, Vikings only wore their iconic horned helmets for ceremonial purposes; this raiding party apparently brought their helmets along in case there is a reason to celebrate.

This set includes eleven minifigures, three villagers and nine Viking raiders; Viking minifigures including Jarl Ingmann (leader of the Viking raiding party and whose runes adorn the sail) steering at the stern of the ship and a Viking Navigator (complete with ‘sunstone’ and ‘bearing circle’ for negotiating the open ocean) at the bow.
33
374
days left