A Cabin in the Middle of the Atlantic Forest 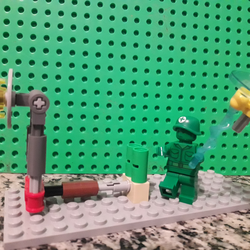 In this set of Lego Idea, we have the proposal of a semi deciduous forest (mounted, on a 48x48 plate, color Brick Yellow); illustrating a scenario in which some kind of civilization has already arrived. Because there are also road elements, bridges, and cabins (large cabin, mounted on two 16X16 plates, colored by Sand Yellow), in this set of Lego Ideas.

There are about 1,000 pieces (exact, 1,006 pieces in this model) that form two main constructions:

1) The forest, with its bridge, river and dam, including in the forest the various levels of forest, of ecological succession, with lower vegetation forests, and the largest trees, and more!

2) The cabin, with its rooms, and its high, retro-style roof, without the old model ceiling slab. A modular hinged ceiling that makes it lower and raise into six modules, three roof partitions on each side of the roof itself.

In addition, this set has many decoration elements; it also has three minifigures very well in the style of woods, backlands. There are also many animals / pets, such as snakes, fish, frogs, wolf / dog, an owl on top of the cabin (a mini dinosaur?). And so on.
Finally, the intention of this set of Lego Ideas is to characterize the Brazilian forests in the universe of LEGO ®, thus portraying and preserving this kind of forest with the LEGO® blocks. This is because the magic and enchantment of Brazil's forests - like the magic and charm of the thousands and fabulous LEGO ® pieces - are severely beautiful and unforgettable, so that they are relegated to just one nation, such as Brazil, or one, continental part, or part of Latin America.
And as these mysteries, charms and beauties should be in common / general use, nothing better than sharing them here, infusing them with the essence of building blocks and creativity. Finally making a picture (and thus recording and preserving) of these forests, and even more - by doing so - with LEGO ® building blocks - which do the job of registering, representing and / or playing with things so well.
13