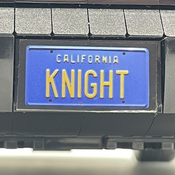 KITT from the 1980s television show KNIGHT RIDER
As a child in the 80s, I grew up watching the adventures of Michael Knight and KITT (Knight Industries Two Thousand) on a Saturday night and was totally enthralled! A man with no past driving a futurist talking self aware supercar working for FLAG (Foundation for Law And Government) helping the helpless was instant must-see-tv!
So, as a thank you to the creators I've built my own version of this iconic vehicle. I've tried to capture the curves and lines of the 1982 Pontiac Trans Am, whilst at the same time, making sure you know it's still made of Lego! Hopefully you'll agree!?
K.I.T.T. features opening doors, opening bonnet (hood), opening boot (trunk), pop up headlights, opening t-bar sunroof and scanner!
Made from approx 1200 pieces
Measurements:
Length - 355mm (updated)
Width - 130mm (170mm with wing mirrors)
Height - 95mm
I do hope you like my creation, and both myself and KITT would love it if you could support and share my project!
Thank you,
Gary
UPDATE - Version 5.0 - Another Major Redesign (27/2/2021)
Firstly, a huge thanks to everyone that's supported, commented, shared and left feedback for my KITT idea! It's hugely appreciated and very useful :)
I've redesigned many aspects of KITT over the past few weeks, including a complete redesign of the front end, giving KITT smoother lines, as well as a headlight redesign and smaller scanner unit (which I think does look much more to scale than before). Along with the front, I've changed the rear part of KITT too, making the boot (trunk) sit like the real car and I've mounted the rear spoiler directly to the boot lid too!
I've attached more new images showing these updates, and a video below of the working scanner!!
I'd really appreciate the extra support and maybe we can hit that next goal of 5000 soon!
many thanks!
Gary
UPDATE - Version 4.0 - Major Redesign (2/1/2021)
Happy New Year everyone!
A huge thanks to anyone who's already supported my KITT idea! I'm really grateful :)
Over the past month or so I've been really busy pretty much completely rebuilding KITT from the ground up! I've changed almost all the chassis which has made it much stronger and used a few less pieces, along with the doors, wing mirrors and KITT now has a new and improved interior - boasting new redesigned front and rear seats! I've also redesigned the front of KITT (again!) which gives him a more sleek look!
I've included 15 new photos showing all the cool features! I hope you like the modifications, and I'm sure there'll be more ways I can improve the look of KITT, so please share and support!
many thanks
Gary
UPDATE - Version 3.0 - Updated Bonnet/Hood and front end + rear quarter (23/11/2020)
Thanks for all the support, comments and feedback! Can't quite believe how many supporters I've received so far!
I've reworked the entire front end of KITT, giving him a slightly longer front nose section and I've also streamlined the bonnet/hood slightly and made the headlights in line with the bodywork! The rear quarter of KITT has also been slightly lengthened, making it look more like the actual Trans Am that KITT is based on.
I've also added new updated photos to show the improvements, along with a video of the working scanner. I'll add more photos of the rest of KITT soon! More updates to follow..... Thanks, Gary
KITT - working scanner video :