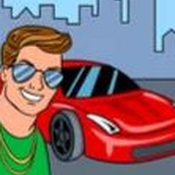 Grata. Venite urbe frui vita simul. The Roman City welcomes its visitors. Take part in Roman life together with Lego.
The Roman city consists of 2700 Lego bricks and offers a lot of fun. Let's go visit the city together.
Wall and gate:
In the forest there is a watchtower with an archer. This archer guards the road to the city. But he doesn't recognize the robbers in the thick forest. They don't plan anything good.
In front of the gate, the guards ask what the stranger wants. They don't know that he is the leader of the robbers. Does he just want to distract the guards? The general watches everything from the wall. A ballistic defense system stands next to him. You never know who is waiting in front of the wall.
Past the wall, the aqueduct brings fresh water from the mountains into the city.
The gate is built of stable stones and can be closed very quickly. Let's go in the city. Follow me.
The Roman City:
A rider gets ready to leave the city. Children play legionnaires next to him. The woman looks at the beautiful fountains that provides fresh water. She probably needs cooling on this hot summer day.
If you walk between the two statues. You come to the marketplace. 2 residents chat in front of the market stall. The seller was ablbe to sell almost everything. He is very satisfided. But there is more to see.
The tree in the middle of the square provides shade for the residents and looks very nice there. The blacksmith is finishing his work. A new customer is waiting for an order. The heat of the fire can be felt throughout the room.
Next to it is the tavern. The guests enjoy the good foof and laugh together. But the leader of the legionnaires is not pleased. His men have been taking a break too long.
Inside the house:
The famous Senator Aurelius lives in the house. he is rehearsing his speech. His daughter come sup the stairs for a visit. The senator's wife is resting in the shade of the terrace. She has a great view over the city. There is always something going on in the square and in the city.
The set:
The set shows the life of the Romans in the city. it offers many play options, but can also be used as a display set. Through the forest and the wall there is also the possibility to play with a fortress in the same Lego set.
The main building has a modular structure. Each floor can be removed to play. I wanted to show a lot of details and minifigures. Because I always think it's great when it has a lot of figures in one set. I built the set on baseplates. The trees are mine too. I also hid some animals in the woods to play.
With simple building techniques I tried to show everything how I imagine a Roman city. So that children can have fun building the set, I used simple construction techniques.
Why I built ths set:
The reason for I built this set is, I missed such themes in the Lego product options. A lot of children like to play with knights, fortresses, Romans and a lot of other historic themes. And it needs no licensens to be cool and the kids would like it. My target was to create a playable set for children an they parents. And you can see and learn something about the history of the world. I thin it 's cool to play with your friends in the world of the Romans.
Why I belive it is a great Lego set:
I think it will be great when Lego built more Sets like this. It is a cool theme and a lot of people would buy that to play with the childern. The set have a lot of play functions and looks also cool in your Lego room. That's why I think this would be a great Lego set with a great theme for young and old Lego fans. Children can have fun and learn something about the history of the world. And learning with fun it is always cool. And you built it on your own.
Now it's your turn:
I hope you like my latest Roman Lego idea. I look forward to your feedback and support. Please show the set to all friends on all channels. Who knows, maybe you can buy this great set soon.