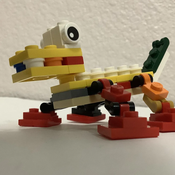 By Game-over2
33 comments
Idea:
In a recent trip with my sister, her boyfriend, and my brother to a trip to California at one point in our trip we went on a steamboat. The ship we were on was big and beautiful ship and where it took us it was also beautiful. After the boat ride and coming off of it I got the idea to make my very own steamboat and the way it would look like and have on it. After my trip and coming home I started to do research what a steamboat would have look like. After a couple of days I decided to base off my ship with steamboats in the 1920 and party boats I saw in cartoons. Now having a idea of what I want it to look like I began to build.
Build info:
The entire ship, water, and pieces of land is built on two 32x32 base plates. The ship consist of two floors and three rooms. The rooms are a engine room, a food lounge, and the ships helm. The back of the ship has a working stern wheel that could actually spin. The color scheme of the boat are the colors black, white, and red.The total amount of minifigures in the build is twelve and they are seven passenger, four crew members, and one jungle man with mask. Around the ship on and outside of it there are exotic animals to be found like parrots, a flamingo, fish, frogs, and rats.