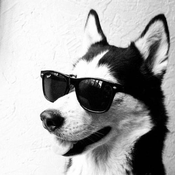 Description
The Nova IV is a combination scouting and combat walker, being fairly nimble while also carrying some substantial weaponry.  The external hardware includes three Viper-14 plasma burst cannons (modified and more powerful versions of the cannons introduced on the Nova I model), including one mounted to a dorsal turret.  This turret can be accessed from the rear boarding hatch, where a small ladder is fixed to the side of the vehicle.  Other systems include a Dynamo X5 burst disruptor, capable of shutting down and disabling vehicles much larger than the Nova IV itself.  On the starboard side of the mech is a Rockfire dual-purpose grenade/missile launcher unit, as well as a high-intensity spotlight to supplement the narrow-beam headlamps mounted on either side of the viewport.  The rear of the mech also includes a mounting point for an additional piece of equipment (demonstrated by a glow lamp).
The internal space of the Nova IV is somewhat cramped, but provides ample space for the husky pilot and control systems, as well as a storage point for a light blaster or other equipment depending on the preferences of the mech's pilot.  The legs of the vehicle are heavily armored while still allowing fair amounts of mobility (you won't see a Nova unit jumping onto the top of a wall or building anytime soon, but it is capable enough).  The Nova IV was designed with both durability and ease of maintenance in mind, and therefore is very easy to service and maintain as all critical components are within easy reach of a ladder or service stand.
Features
Why?
I built this vehicle for a few different reasons.  First, it is the fourth of several versions of a husky mech (hence the "IV" in the name, the original mech was called the Nova) that I have built over the past several months in a continuing effort to have a satisfactory mech (the first version can be seen on my Ideas page, we won't talk about the second or third ones).  Second, I find it very interesting to build vehicles for the LEGO husky dogs, as they present a completely different set of proportions to work with and around.  They also don't require as much space as a regular minifigure would, which allows me to focus on external details rather than trying to cram a pilot into a too-small space.  I feel that this vehicle would make a great LEGO set because it would appeal to kids (awesome walker and cute doggo), teens (great display model with playability added), and adults (awesome walker and cute doggo).
Thank you!
Thanks for checking out my Nova IV!  I'd really appreciate your support for this project, and of course any comments or suggestions are welcome.  Be sure to share this project with your friends so this can become an official LEGO set!