By Furno
0 comments
The Minotaur war is my original idea.
The Kingdom of the King Titus was a fine kingdom. The Kingdom had little dealings with many of the warrior groups that were in this world. Orcs, Trolls, Dark Wizards, etc. However an army of brutes threatened their peace. They were known as the Minotaurs. They were half man half Bull and all brutal. War broke out and now the Kingdom of King Titus, and the Army of the Minotaurs are fighting day by day for control over the huge lands belonging to Titus.

So the sets I have yet to design yet so im going to show you my character designs for now:
In the first picture you see 2 Minotaurs in the front. The one on the left is Shadow-Axe and the one on the right is Taskmaster.

Shadow-Axe: The oldest and strongest Minotaur in the army. He is the leader of the Minotaurs and their best warrior. His dark red horns make him menacing and intimidating to his foes and other minotaurs. He carries his large two-headed axe (of his own creation) and a smaller axe for quick attacks.
Taskmaster: The most brutal of all the minotaurs besides Shadow-Axe. Taskmaster is the, well taskmaster, of the minotaurs. (In case you did not notice, the Minotaurs name themselves by their form of fighting or proffesion) He orders the Minoutaur infantry and gives the battle plans. Without Taskmaster keeping the warriors in line, chaos would overtake the army.
Taskmaster carries his dagger for the rare occasion when he needs to fight and his whip for making it obvious he is going to give a command. 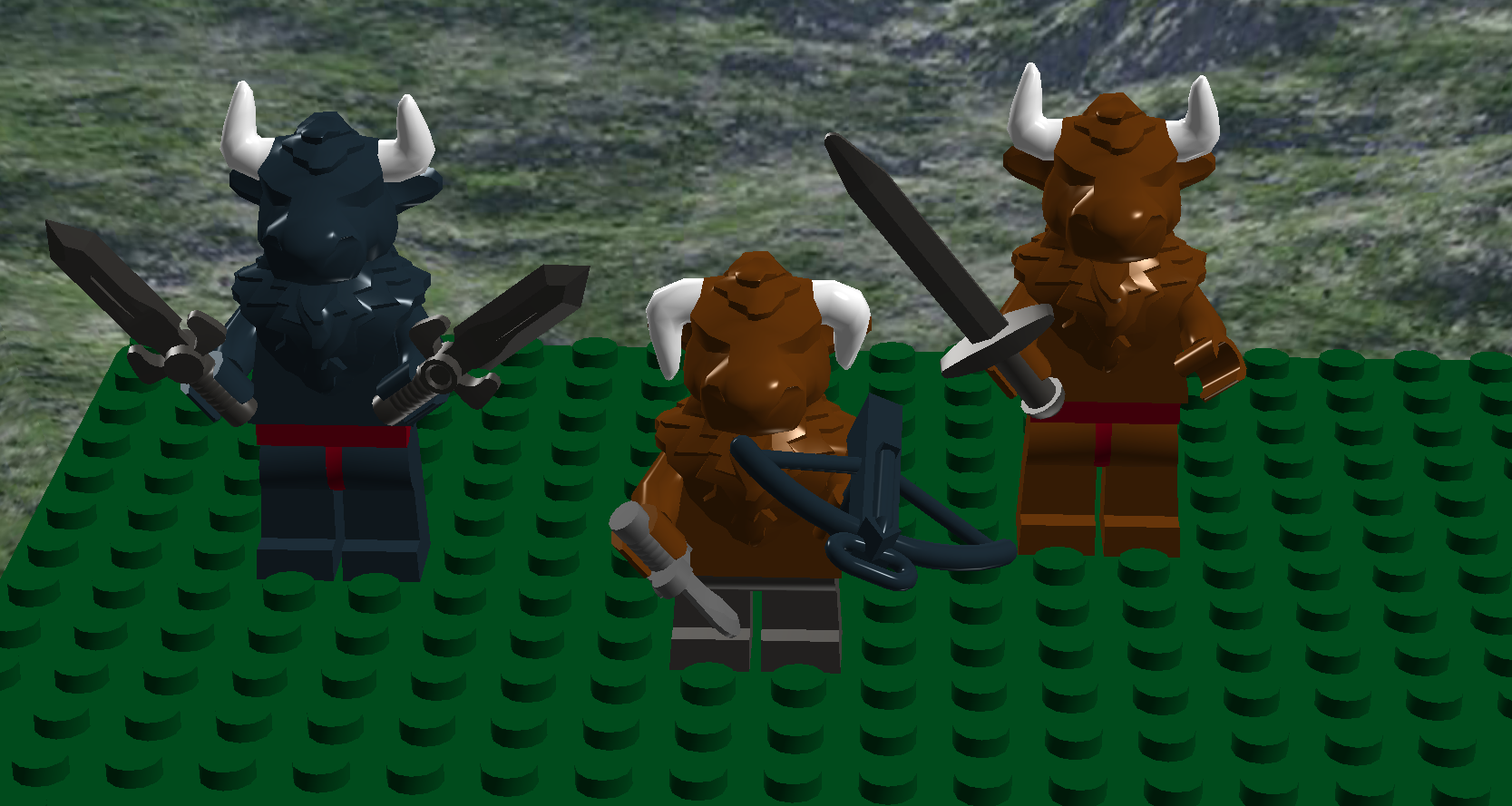 This is the Infantry of the Minotaurs. Without them, their would be no army. They have no significance other than that they fight. Unlike Shadow-Axe and Taskmaster. The thing I like about them is that they look cool and look good when you have multiple of the same one. Because its not a good army if you only have one archer or one swordsman or so on.
Warmongers: The Warmongers are the strongest of the infantry in the Minotaur army. They strike interest because of their black fur which is unique to the Warmongers only. They carry to swords and attack in brutish forms. They barely focus in battle, simply swinging their swords in multiple directions which scares the enemy and gives him time to finally hit the enemy ( XD )
Minotaurlings: The Minotaurlings are the odd race of Minotaur that stay a short height. Their horns always point straight downward as well. Most Minotaurslings are masters at archery though they arent bad swordsman either.
The other is the simple Minotaur soldier, He can carry just about any weapon or tool and does not have any features of interest, they also rarely bear any armor other than the red belt.