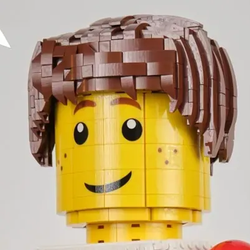 Without ABS: No plastic, No LEGO life, No hobby!
ABS (Acrylonitrile-Butadiene-Styrene): The building block of LEGO life.
Enjoy the movie:

Ever wondered how you're life would be without LEGO. Not only wouldn't you have this creative and fascinating hobby. You probably wouldn't have become an engineer or the creative person as you are now.
This ABS molecule on a 2x4 brick is a tribute to science and LEGO.
Like we have our DNA, ABS is the basis for LEGO and its minifigures.
I hope you are as fascinated by the facts in the movie as I did while making it. And that you want this work of art created by both nature and scientist on your desk, piano or windowsill.

About the model:
The model is 500 million times enlarged version of an ABS molecule.
The brick base is scale 6.66:1. Brick of choice is of course the most basic brick of all: the 2x4 red brick.
The side of the brick is made of printed wall elements showing information about the molecule and history of ABS in relation to LEGO. For an idea of scale: the base is 13x25 studs wide (=104x200 mm)
The set exist of approx. 480 bricks and includes the minifigures Gene and Tomas with The One Brick.
Interesting building techniques are used to create the atoms and their connections.

Chemistry:
A lot about ABS was said in the movie. If the movie was to fast or funny you can read even more about ABS here:

Definition of a molecule: The smallest particle of a substance that retains the chemical and physical properties of the substance and is composed of two or more atoms: a group of like or different atoms held together by chemical forces. In this case: 15 Carbon atoms, 17 Hydrogen atoms and 1 Nitrogen atom.

The LEGO model is a “ball-stick”model in which atoms are represented as balls and the invisible chemical bonds are represented as sticks. In reality an atom is not a ball, but a nucleus of protons and neutrons with electrons orbiting the nucleus. A bit like earth and other planets orbit around the sun. The combination of various atoms make a molecule unique, giving it its own properties. Keep in mind that every ABS molecule is the same.

Chemically, ABS belongs to the family of thermoplastics. They are called terpolymers, because they are made of three different monomers: acrylonitrile, 1.3.butadiene and styrene, to create a single material that draws on the best properties of all three. You can see the three parts in the pics, the base of model or the animation.

If you look at the pics of the monomers more carefully you see that the angle between the bonds is always approx. 120 degrees and that all three monomer molecules are flat. When the three monomers form ABS you see that single bonds change in double bonds and vice versa and that the bonds become more three-dimensional. (Which was quiet a task to get right in LEGO). The bonds have approx. 120 degree angles in al views!

This model shows only one ABS molecule. The billions and billions of ABS molecules form endless strings like a very long but single spaghetti .Separate strings glue together (by Acrylonitrile) like a plate of spaghetti. And form a tough mass. You can see this in the animation.

The design process:
I am visualization artist working for an engineering firm specialized in airport design and airport master plans, in The Netherlands. I always had an interest in technique and large complex projects. My first entry on Lego Ideas was a rare and heavy cargo wagon: The torpedo wagon (you can still vote). For a change I wanted to create something very small that would appeal to LEGO fans (at least I hope it will). The idea for the ABS molecule was born. It is in fact the smallest LEGO element that will ever be.
It was 25 years ago that I studied chemistry at high school, so I had to refresh my mind by googling, sketching and calculating. I designed the 3 monomers quite quickly but when I wanted to compose the complete ABS molecule I could not retrieve any info. Until I found a great site: www.chemagic.com. That site has 3D modelling software for molecules. After putting in data of the atoms I was surprised to see a very twisted 3D molecule. As a result I had to redesign the atoms so the angles of the bonds would be right. This worked out OK, so I went on designing the base. The base is mainly made of wall elements. That way information can be printed on the bricks.
Because the base is hollow, Power Functions could be applied to make the molecule spin slowly.

The animation process:
The model was designed in LEGO Digital Designer and then rendered in POV-ray, 3D-MAX and Lumion.
As an animator I wanted to make a simple animation. However during the design process I got more and more intrigued by the scale of the molecule, the forces and how it works and decided to share this with you. From a simple animation it grew into a film project with storylines, jokes and of course information. All script writing, modelling, animation, rendering and video editing were done by me. While the film was filled with more info and interesting facts it got more complex and things had to be done simultaneously and in different order to meet some kind of deadline. To keep the film interesting, it had to be funny. This resulted in an even more complex story line and the laboratory scenes that were built in LDD and rendered in POV-ray. Finally I decided to add my voice (Gene) and that of my neighbor boy (Tomas).
After all this was a rewarding project, I learned a lot and had a lot of fun. If you agree with that, I hope you vote and we all be able to have the molecule on our desk pretty soon.

Thanks for reading and watching

Other projects:
Torpedo wagon (also with an informative animation)
Friends Modular (a funny side project made with my daughter's LEGO