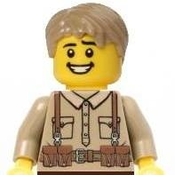 The Mid-Autumn Festival (中秋節) , also called the Moon Festival or Harvest Moon Festival, is one of the most celebrated holidays in Asia. When the full moon shines brightest in late September, people give thanks for the current harvest and have family get-togethers. Offerings are made to a well-known character Chang ‘e (長娥). Among the offerings to her are moon cakes. Making and sharing mooncakes is one of the hallmark traditions of this festival. Their round shape symbolizes completeness and reunion of families. The husband of Chang ‘e and hero: Hou Yi (后羿) is also celebrated because of his use of a bow and arrow to shoot-down nine of the ten suns; leaving only one in the sky. Everyone was grateful to him for saving their crops from the heat of ten suns. In modern times during this lunar appreciation or moon watching, families would get together in their neighborhoods and have barbecue cook-outs. In this Lego set, we have a family enjoying their BBQ and moon cakes. All the while, being watched by Chang ‘e on the moon as it moves through the sky. Let’s not forget the Moon Rabbits (月兔) who accompany Chang ‘e. It looks like a few have made it to their BBQ! This Lego set contains a family of six minifigs: Mom, Dad, Grandma, Grandpa, Son and Daughter who are all enjoying the holiday and barbecuing their favorite dishes. Notice the Lego Moon Cakes some of them are carrying.