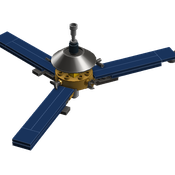 The Arduro IV is a 2 stage launch vehicle, with 4 strap on CCBs (Common Core Boosters), using the Vis engine, with one per CCB, and the vacuum optimised K-1 on the upper stage. All stages burn Kerosene and Liquid Oxygen. The Pax station is capable of hosting a crew of 5 for up to 6 months, and will be able to function for a minimum of 3 years on orbit, with the possibility of it becoming the core of a modular space station. It has 2 solar panels, a robotic grappling arm to assist with docking, and a new static radiator design. It also has 2 docking ports, one active and the other passive, the passive one planned to be used primarily for cargo, due to its proximity to the grappling arm. The rocket itself is at 555 bricks, the Pax station at 80, and the launch tower at 318 bricks, bringing the total part count to 953.
I made this set for fun, and I think that it may be an appropriate way to introduce people that are interested in LEGO into the wider field of space. This set is admittedly rather complicated, probably earning it the 14+ recommended building age. The set can separate into the different boosters and stages, as shown, and there are multiple moving parts, all in the launch pad and the Pax station. One brick is left off the Pax station while it is inside the payload fairing, but it is a deployable antenna, so it is fine being left off. These images are edited to give them some depth and variety.