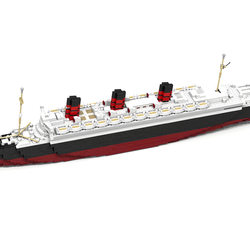 SS Normandie was a French ocean liner of the General Transatlantic Company. Launched in 1931 it had a short business career until 1941, date on which it was requisition by the US to war. It capsized following the ton of water used to extinguish a fire. It measured 313 meters long and 36 meters wide, weighing over 80 000 tonnes was propelled by 4 turbo-electric engines of 160 hp.

It can probably float even though I did not test it (I do not own the bricks in sufficient number).