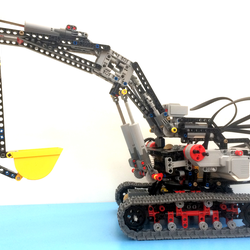 Inspire by the Lego Technic Ideas book from the 1980s, but using modern lego technic components. The improvements made to the original model from the 1980s  are that the direction of travel is automatically switched when the end of travel is reached.

Standard Lego Power Function components are used in a system which changes the direction of travel. When the cable car reaches the stopper dish the torque increases in the gear train. The gear train has a differential were one axle does not rotate during the travel along the cable when the stopper dish is reached this rotates. This in turn over comes a spring loaded gear train a flips the switch to the opposite direction.