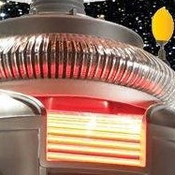 By b1gg1b
34 comments
This is the Robot; a Class M-3 Model B9 General Utility Non-Theorizing Environmental Control Robot from the Lost in Space TV series.
I grew up in the seventies and eighties. There was plenty of material to inspire a kid’s mind. I was so fascinated by it all, but especially the robots. My primary school years were filled with my desire to become a robot maker. Obviously, at the time, I had no idea what it meant. As I grew and explored new things that desire faded.
Now in a new century innovative technology provides an atmosphere to awaken past dreams. Thanks to platforms like Digital Designer and Stud.io anyone can become a robot builder….and make that mean whatever they want.
I have been a Lego fan as far back as my memory can take me. What a chance, if only brief, to share my first robot build to Lego Ideas; the Robot from Lost In Space. I am willing to bet there are others out there that love Sci-Fi and Lego. Hopefully, this build will reawaken faded dreams for others.
Your support means more than you could know…