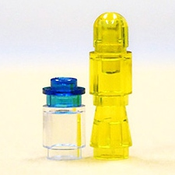 By sizeblog
71 comments
Hello, I will introduce my project.
In the turbulent era when power was justice in Japanese history, Samurai were active on the front stage and Ninja flew on the backstage. Originally they do not fight each other, but "If Samurai and Ninja fight, which is stronger?"  That is the theme of the work.
Feature:
Each character uses a minifigure head and is composed of proportions that are close to real humans. The size is about 4 inches (height not including the pedestal)  Due to the structure with many moving parts, various poses are possible.
Others:
The pedestal can be used as a storage box for storing small items such as weapons and equipment. The pedestal of the boy ninja is tatami mat. It can be used as a shield to prevent enemy attacks or as a shuriken practice. You can stab a shuriken into a tatami mat.
This set includes:
SAMURAI
・Samurai General and Pedestal
・Infantry Captain and Pedestal
・Infantry and Pedestal
・Samurai battle flag
NINJA
・Ninja and Pedestal
・Kunoichi and Pedestal
・Ninja Boy and Pedestal
・Logs used for the substitution Jutsu
＊Tatami is a traditional Japanese flooring made of rush.
Ninjas have a technique called "Tatamigaeshi". Hit the edge of the tatami mat to make it a shield and protect it from enemy attacks.
＊"the substitution Jutsu" is one of the famous techniques of the ninja ability "Ninjutsu".
This technique is famous, but there are many mysteries and it is difficult to explain, so I tried using manga.
If you are interested in this project, please support. Thanks for watching!