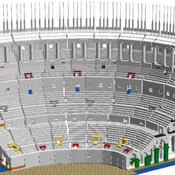 A fabulous racing seaplane at scale 1/20 : the Supermarine S.6B

This British seaplane Supermarine S.6B has been developed to take part to Schneider Trophy competition of year 1931. This plane has been designed and developed for the Supermarine Company by aeronautical engineer R.J. MITCHELL. The S.6B was the last of a line of racing seaplane marking the culmination of the design and the aerodynamic technology for this era.

I decided to built this plane because S.6B is representative of aeronautic technology in years 1920/1930. Engine power and plane speed have increased a lot in only few years. The design of S.6B is pure and very aerodynamic and this plane has permitted to win Schneider Trophy Cup.
Cause to its design very aerodynamic and the fact that seaplane are not represented very often, I want to present it as a LEGO set (that's why I try to put same colours, same scale and wings moveable).
I hope you will appreciate my model. Thank you for advance for your votes, all comments would be wellcomed. You can also see other projects on my facebook page (while asking me to be my friend) : https://www.facebook.com/celeste.enclume.7
and also on my flickr profile : https://www.flickr.com/photos/190671617@N04/albums