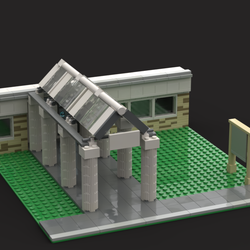 Hello everyone, I had a project at my school. It was called our "PTECH footprint" project, we did this since we were going to be leaving the PTECH building for the most part next year and we would be mostly at college. We had to make something to make our mark on the PTECH, for mine I made a Lego build of the front entrance of our school, and I originally just planned on making it go in our display case at the school, which I am still going to do, I am going to order the parts for it but I also got an idea. What if I put it on here? It would be amazing if it was to become a real set, then I could really leave an imprint on PTECH as well as spread the knowledge of this type of school because it is really an amazing school type, I often find myself comparing it to Hogwarts from harry potter. But all in all this way I could also make it more likely that younger youth that sees or even gets this set would get the awareness of this awesome opportunity and maybe gain an interest in coming to a local PTECH school if they have one nearby. I really hope I can get this to be a real set and I will thank everyone in advance who supports this project.