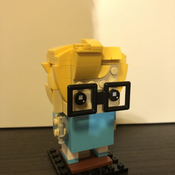 By verence80
25 comments
“El Capricho” or, translated, “the mood,” is officially known as “Villa Quijano,” located in northern Spain. Designed and built at the end of the 19th century by Antonio Gaudí. It is a typical Art Nouveau building. The special feature is the orientation towards the sunrise. In the morning, the sun lights the great bedroom at the east wing, and during the day the sun illuminates the park and the big greenhouse. In the evening the sunset bathes the salon in the west wing in golden light. At the backward side of the model base is a narrow band of sunflowers. This detail reminds of the thousands of sunflowers in many small tiles on the facade.