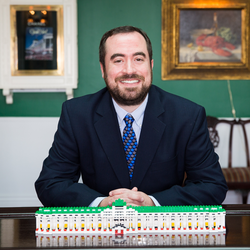 When you travel across the Mackinac Bridge to or from the Upper Peninsula of Michigan, it is impossible to miss the beauty of Grand Hotel on Mackinac Island in the view. The view I saw traveling across the bridge inspired me, a LEGO fan, to make a model of Grand Hotel.
MLive: Engineer builds 9-foot Mackinac Island Grand Hotel entirely out of LEGOs
After building a 9-foot-long version of the large building, I took on the challenge to build a model on a scale better suited for a LEGO set – my submission to LEGO Ideas. In the following video, you can see this 710-piece model from when it took a trip to Mackinac Island to stroll around the hotel that it was designed after.

Having lived in Michigan most of my life, the story and beauty of Grand Hotel really stuck with me as I learned more about its stately structure and history. Grand Hotel is a family owned National Historic Landmark, a point of pride for the great state of Michigan and has been for 131 years. Situated on the travel destination of Mackinac Island of Michigan’s Upper Peninsula, Grand Hotel is surrounded by lush landscapes and horse-drawn carriages (no cars allowed on the island). Grand Hotel’s age is not its only impressive feat: the front porch at 660 feet long is the world’s longest and its original wood framed structure was built in only 90 days! The hotel porch is also well known for its many white rocking chairs where you can sit back and relax looking out over the Straits of Mackinac and its pots of thousands of blooming red geraniums, the hotel’s signature flower. All of this produces an environment of vibrant colors which was exciting to represent with LEGO pieces. I especially enjoyed using flat azure-colored pieces attached upside down on the porch ceiling of the model to match the sky blue that can be seen painted on the hotel.

I hope you will get to build this set and experience the timelessness of Grand Hotel, America’s Summer Place. Thank you for your consideration!