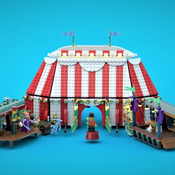 By KevCircus
136 comments
LET THE SHOW BEGIN!
Relive the era of the very first Circus, It's incredibly fun and mysterious universe around the travel.
The greatest difficulty of this creation was to represent an acceptable and playable dimension. So I made the choice to create only one part of the marquee in order to be able to play easily. The travel trailers are the homes of circus people, they have traveled a lot, so they have been repainted many times. They are heated with wood.
The magician's trailer contains a secret trap door with a simple mechanism hidden behind fake tombs in Egypt. There are also a lot of objects in large storage boxes such as a bicycle, musical instruments, tools for maintenance and construction of the circus, and a snake in its basket.
Inside the marquee is the man cannon and a trampoline as well as a trapeze bar.
As far as minifigure are concerned, we have with us:
Mr Loyal
The woman with a beard
The giant man
The magician and his rabbit
The trapeze artist
Two musicians
Marquee sizes: length: 30 cm, height 24 cm.
Caravan size: length: 11 cm x 6 cm.
Number of pieces: 1108.