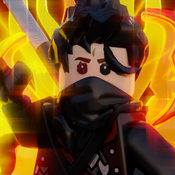 By Guitarman2
6 comments
When Kodiak made the XY1300 Spacecruiser, it was an instant success. But the XY1300 was unable to do deep space exploration due to the heavier asteroid fields. Thus came the LV20 Deep Space Explorer. Being more heavily armored, and more heavily armed with 4 RKX1 tri-barreled energy launchers and 8 GK1 double barreled assault blasters, it was able to withstand some of the heaviest asteroid showers. With this craft, the Arcturian colony (the space colony of the U.S.A) and other space colonies were able to expand their territory to the farthest reaches of space. Due to the fact that it did not have high speeds (for a spacecraft) only able to reach 20,000 Mph. (32,186 Kph) Because of this, the LV20 was mainly a cargo ship and only a few were made to be passenger craft. I built this set to have a deep-space exploration to add to your sci-fi fleet. (All turrets can rotate.)