This is how big the E.T. is compared to the minifig E.T. 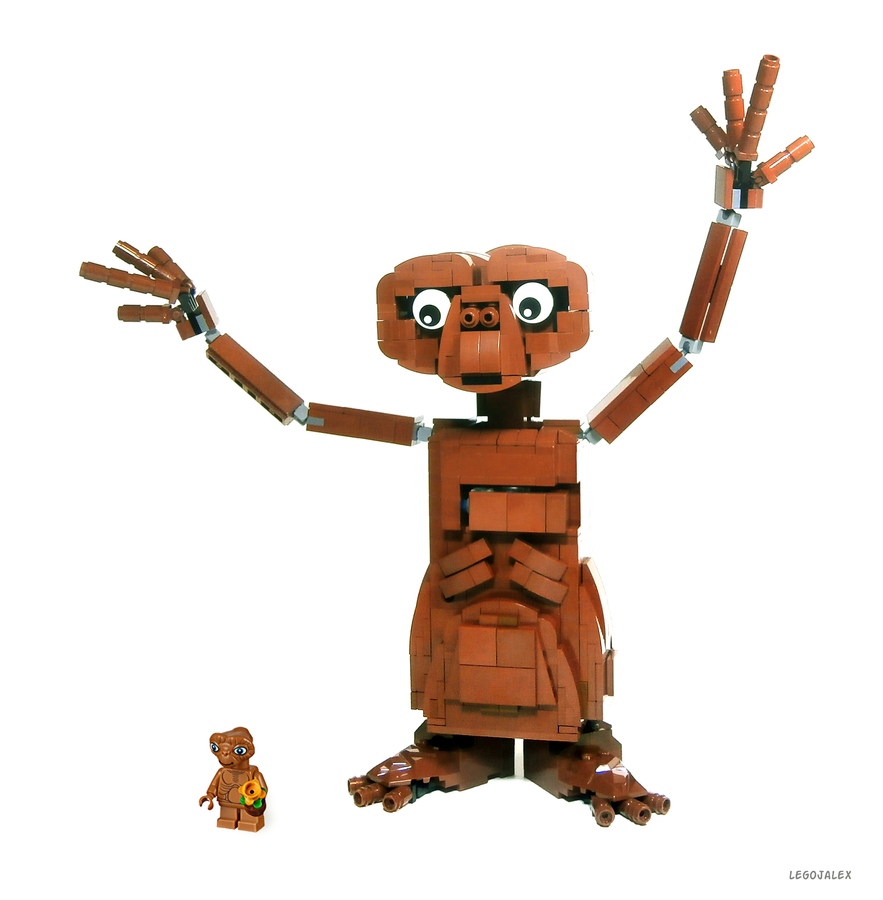 How The Original E.T. Communicator Was Built

I have been in contact with the designer of E.T.'s communicator, Henry Feinberg. Below is his description of how the communicator was built and how it technically worked.

Earlier in my career, I used everyday materials to explain the magic and mystery of science as Associate Producer of the TV show "Watch Mr. Wizard" on NBC. I later used this technique to interpret new developments in science and technology to the public for AT&T's Bell Laboratories.  Bell Labs was a research laboratory where new invention patents were issued daily. You might have heard about some of the most famous inventions, like the transistor, Telstar communication satellite and solar batteries.  I accepted this challenge as a private project while at Bell Labs.

E.T. was an alien who was stranded on Earth. He needed to signal his predicament to his rescue ship. To do this, he needed to built a space communicator from parts he found in Elliot and  Gertie's house.

For the film, I needed to make E.T's communicator perform three main functions:
1.  I had to create a help message.
2.  I needed to create a a programmer device to repeat the message over and over.
3.  Finally, there had to be a way to transmit the SOS message into outer space.

Here's how I did it:
1.  The message was encoded by scratching holes in the painted surface of a metal saw blade which rotated on Gertie's record player.
2.  I created the programmer by using a row of metal hair pins held in place on a wooden clothes hanger placed over the saw blade. They made contact with the metal through the openings in the paint.  The saw blade was rotated tooth-by-tooth by a ratchet made from a knife and fork hinged together and connected by a string to a nearby tree branch. Wind bent the branch and pulled the string back and forth. Wires from the hair pins led to the keyboard contacts of a Speak & Spell toy. (I rewired the display to show new "E.T. language" symbols.)  As the blade rotated, different combinations of hair pins connected, causing the Speak & Spell to recite the message.
3.  To transmit the message, I picked up the sound of the Speak & Spell with Elliot's toy walkie-talkie.  TV antenna cable sent the low-power signal from the walkie-talkie to a UHF tuner "borrowed" from Elliot's mom's TV. The tuner was modified to convert the low frequency of the walkie talkie to become a microwave signal capable of reaching outer space.  The output of the modified tuner was fed into a coffee can which resonated and amplified the signal. The coffee can was mounted on the handle of a golf umbrella and sent the signal through a funnel waveguide directed at the umbrella.  The surface of the umbrella was coated with foil which reflected and focused the signal into outer space.

The technical name for a device of this type is a beacon transmitter. The device I built for the film actually works, but I didn't have to make it transmit. In theory, it could!

As an exercise in creativity, you might notice that each of the I items chose to create E.T.'s communicator was used in a way different from its original purpose. Psychologists call this a departure from "functional fixedness."  In fact, the final design is completely different from my original concept, which used the microwave oven as the transmitter and a metal patio umbrella as the antenna.  Mr. Spielberg appreciated my first attempt, but wanted the communicator to be portable enough to be carried on Elliot's bike. 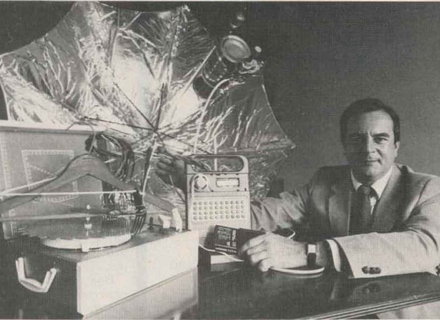